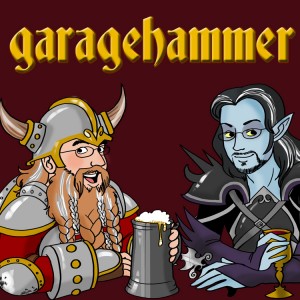 Howdy all! This episode has a “disclaimer” in the beginning. Christopher and I went back and had to correct some of our show opening statements. It’s no big deal, but we just thought we’d mention it. So this week we talk about the tournament we were in. We didn’t place very high and we aren’t planning on becoming a “tournament” show, but we thought this was a great opportunity to talk about our games and, more importantly, how we can do better. There’s a lot of good info for the new player and some stuff to keep the old grumblers interested (or at least cringing and laughing at some rookie-esque mistakes).

After that, we have the Phoenix Prince, Harrison talking about one of his games and the differences between the tournament and the garage.

Finally, in Garagehammer 101 we discuss deployment. We don’t get into the amount of detail we’d have liked to, but we think it’s a pretty good start and we can revisit it later. The contest winner is also being announced during this episode. Enjoy!

Old Man on the Bridge by King Kong